My wife Hilary and I were passing the huts at Brackenbury Cliffs three summers ago, en route to lunch at the Ferry Inn – one of our regular jaunts. As inhabitants of Bury St Edmunds, and both having been brought up by the sea in Kent and Norfolk, we always try to visit the sea whenever we can.

Noticing a ‘for sale’ sign on a hut we went and had a look. An attractive hut, we thought, on a good site. ‘Dream on!’ I had said. She however was already on her mobile phone to the owner. Three hours later, having met the owner and seen inside (and he having reduced the asking price considerably), we had decided to clean out our meagre savings and buy it.

Looking back, the key thing was that we could just about afford it at around £10,000. Having recently retired we had no other savings, but decided that this chance was too good to miss. We had many happy days thereafter at the hut and while we realised that rents were a lot higher than they had been in the recent past, we settled down to add a bit of Felixstowe into our lives, regularly visiting the town and spending money in the shops. And I won the Beach Hut Owner’s Poetry competition in 2015 and was very proud to receive my prizes from Doreen Savage, the then deputy Mayor.

When the letter arrived proposing the new lease terms, in December, we were in shock. We read the proposals several times to make sure we had not misunderstood. But no – our recent dream had been shattered. As pensioners we would have to find huge increases in rent for the same services, such as they are, for the next eight years! The very years we had hoped to find some peace and quiet after living very busy lives would now have the stress of the rent increase each year as well as the fact that we knew we would NOT be able to afford the proposed 10-year licence fee at anything like £7,000.

As a result, should we decide to sell, the capital value of our hut would fall to a very low figure, even if we could find anyone to buy it with the lease premium having to be paid up front.

Like others we wrote to every councillor and were pleased when some had the courtesy to reply – not least Cllr. Savage who had decided to speak up for us at the December Council Cabinet meeting. We were so impressed with her efforts at that meeting that I wrote a poem just for her!

In summary we cannot afford the lease fee and our enjoyment in using the hut, and indeed visits to Felixstowe, have already been impacted negatively. Councillors, if they accept these proposals or anything like them, will have misjudged the situation badly. Yes, local government needs to find additional funds, but it needs to identify how to do this in a sustainable way – not by relying on some half-baked scheme dreamed up by consultants who think that we can be compared with Southwold! 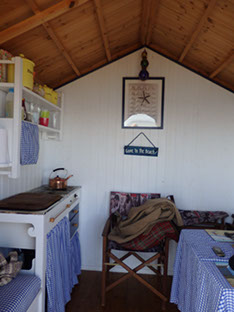 For more information on our association please do not hesitate to get in touch using the form to the right or you can contact us via social media, we will be more than happy to help.